"One of the horse's most painful dental conditions"

A diastema (plural diastemata, also often called diastemas or diastases) is a space between 2 teeth. When we speak of diastema in horses we usually mean spaces between the molars of the horse.

In healthy horses, all the molars (6) that form 1 row of molars fit very closely together. Each row of molars thus functions as one functional unit. A horse suffering from diastema has abnormally large spaces between one or more consecutive molars. These spaces quickly fill up with food particles (see photos). Diastemata is most common in the lower jaw, especially between the posterior molars, but this condition can occur between all teeth.

Horses suffering from diastema are generally not in an optimal condition. They often eat slower than other horses and seem to suffer most from pre-wilted haylage or silage grass. Often a bad smell coming from the mouth is noticeable. In many cases the horse will 'quid'. This means that the horse will drop partly chewed feed from its mouth with a certain regularity. The 'quidding' usually gets worse when the horse comes back to the stable in autumn.

Different forms of diastemata can be distinguished. These patients can be divided into 3 groups

What happens in the horse's mouth?

During chewing, food will be squeezed between the teeth. This food is caught between the teeth and decomposes quickly (thanks to the bacteria in the mouth). The 'rotten' food (usually hay/pre-wilted haylage) causes a serious inflammation of the gums (periodontitis). In severe cases, this infection penetrates deep into the jaw. This affects not only the gums but also the tooth and its anchoring (the periodontal ligament). At an advanced stage, the molars in question are often (partially) loose. Diastemata is one of the most painful dental conditions in horses.

In addition to essential routine dental treatment, patients need targeted treatment for these problems. In any case, the spaces between the teeth must be cleaned so that all rotting food is removed. This is done with specially developed flushing devices (water pressure) and compressed air. Then, depending on the type and number of diastema, the further treatment is decided. This can range from temporarily filling the spaces with special fillings, enlarging the diastema (so that the food can also be released) to pulling out too severely affected and/or loose molars.
Horses with diastema are in a lot of pain in the mouth. In addition, it is very important that the horse stands still during the treatment. The treatment is therefore always carried out using sedation and, if required, supplemented with local anaesthetic.

Horses suffering from diastema often thrive best on tender (short) grass, supplemented with concentrates and/or mash. Wet pre-wilted or long fibers silage aggravates the symptoms. Horses in very poor condition should be given a further individually adjusted ration (e.g. more fatty diet). Some horses with diastema are very willing to have their mouths rinsed with water. Temporary rinsing can also be done with a diluted chlorhexidine solution as disinfection. Of course, the correct diagnosis and timely and professional treatment of your horse remains the key to less painful teeth.

For more information about this disorder or other dental problems in horses, you can always contact us. 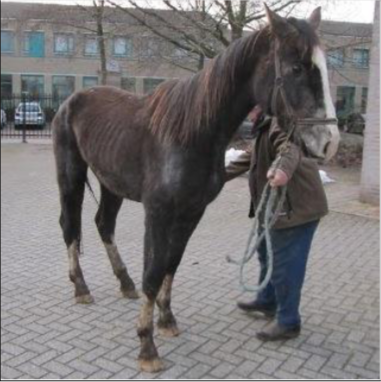 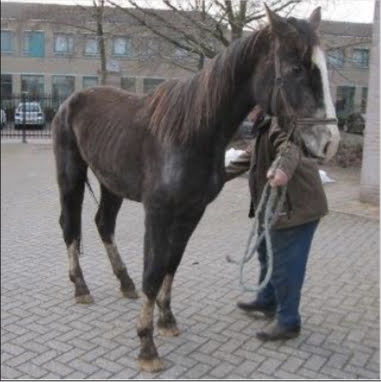 The nonsense and risks of creating so-called 'bitseats' in horses.

'Bitseats' or the (extreme) shortening and rounding of (part of) the first molars is neither harmless nor scientifically proven.

World Animal Day & The race to the bottom

About the use of unhealthy breeding mares in the equine reproduction.

New creation: an A4 booklet on the most common injuries related to bits and bridles and a lot of advice on correct bit-fitting.

Bit- and bridle-related injuries in the ridden horse - Part 2

The first part of this article was an overview of the normal anatomy and the most common 'bit-related injuries' in our horses. In addition to a good inspection of the oral cavity and diagnosis of these typical injuries, it is of course essential to be able to give the owner well-founded advice.

Bit- and bridle-related injuries in the ridden horse - Part 1

Bit- and bridle-related injuries (further abbreviated as "bit injuries") in our horses are common findings during routine dental checkups.

Tooth extraction in horses in 2021

Molar extractions 20 years ago were done almost exclusively under general anesthesia and via an (external) surgical approach. In 2021, this is still only necessary in very exceptional cases. As a result, the risk of complications has been drastically decreased (Caramello et al. 2020).

External trauma as a cause of equine dental developmental disorder

This case illustrates how a traumatic impact to the head of a young horse can lead to complex dental pathology. Horses in general - and young horses in group housing in particular - can easily injure themselves or each other. The impact of these traumas ranges from harmless to fatal

Extraction of a broken hook tooth

When a canine tooth is removed, a mucoperiostal flap is usually created, after which a portion of the surrounding alveolar bone is removed. When the tooth has been prepared free and sufficiently mobilized, it can be removed.

Wouter Demey will be giving a lecture about Developmental Disorder in Equine Dentition, this 4th of June 2021 during the (virtual) 29th European Congress of Veterinary Dentistry - European Veterinary Dental Forum.

An elevator for the smallest horses at Equide!

Equide recently developed and had an elevator custom built to comfortably and safely treat the smallest of your ponies!

Equide, in partnership with Vetrident (Dierenarts Stijn Teysen) and supported by the NCED , has recently published a poster (size A0) listing common bit and bridle related injuries.

Peripheral caries are described as the loss of the cementum that forms the outer layer of a horse's teeth.

Due to the fast evolving pandemic caused by the new Corona virus and the associated disease (COVID-19) Equide has taken some important decisions:

Today I would like to mention a major issue in our profession; suicide. Not because I like to complain but because I'm seriously worried for my profession, my colleagues and their health. I recently read a post by an American veterinarian - Erin Wilkins - who just lost...

Although summer is still around you can already sense a little hint of fall in the air. This picture is taken at the entrance of our clinic this morning. We still feel highly privileged to be able to work in this magnificent setting.

Equine Odontoclastic Tooth Resorption and Hypercementosis EOTRH is a disorder of the incisors (and possibly the canines) in the older horse.

Senior horses are more susceptible to a number of disorders and undergo (often physiological) changes. They therefore require extra care and management.